All Blogs>Health & Wellness>Blog detail>
Back
How Children Benefit from Standing Desks
Aug 05, 2021
808 views

We've all come such a long way in our efforts to automate as much of our surroundings as necessary. Kitchens and dens have already been invaded with flip-down TVs and numerous house robotics, with most of these devices running without the need for human intervention. Rather, the Internet of Things connects them. We leaned back and relaxed, allowing machines to do all the struggle for us, with so many formerly tiresome, repetitive activities now computerized and simplified. The harder they work, the longer we sit.

Inactivity has been linked to various unfavorable health consequences, including diabetes, heart disease, and hypertension, study after study. However, most of this emphasis has been based on individuals working in an office setting and the harmful impact of sitting on physical health. As a result, standing workstations are becoming increasingly common in workplaces.

More movement is beneficial to our bodies. Many experts have begun to evaluate the use of standing-height desks by letting students sit on a stool or stand as they wish, instead of standard desks in recent years. Although the results have been promising, researchers have traditionally concentrated on using standing desks to combat sedentary behavior.

Adjusting your typical approach at the desk is likely to lessen the negative impact of prolonged sitting. Decreased sitting has a range of health benefits, such as the following significant benefits:

Due to their multiple benefits, standing desks are rapidly being utilized as corporate workstations, gaming tables, home furniture components, and other applications. While the advantages of standing desks for grownups are apparent, the benefits of standing desks for kids are still being debated whether standing desks in schools are essential. A standing desk for children may appear to be meaningless. It may be claimed that because children never sit still, the necessity for this is unnecessary. While that picture may have been accurate a few decades ago, modern children do not come close to it.

Students sit in their classrooms all day and then sit once more after school to do their homework. They eat dinner together and then spend the night on the couch watching TV. Kids interacting outside in the evenings or weekends are becoming extremely rare in this modern, digital realm. Gaming consoles, smartphones, and computers induce a slouched, sat posture with one's gaze fixed to screens. 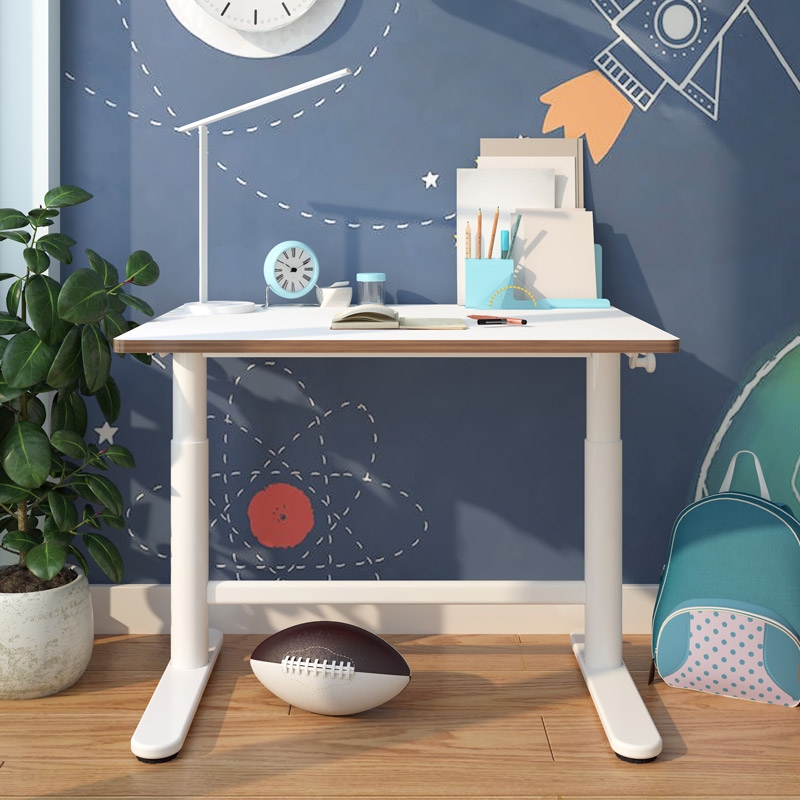 Benefits of Standing Desks on Kids

Early habits, whether beneficial or harmful, frequently persist throughout adulthood. Assist children in developing healthier habits and make standing and moving more a common way to live by the time they are adults, as opposed to excessive sitting. The advantages of frequently sitting and standing are not only physical. When children are allowed to stretch their bodies entirely, their capacity to understand improves considerably. Various studies have looked into how enjoyable it might be to let a child stand at their desk.

Evidence reveals that schoolchildren spend much more time sitting at school than at home, implying that transforming the way classrooms are established has great potential to influence this behavior. Standing desks were installed in 24 classrooms as part of a study. During third and fourth grade, the standing pupils and a control group of sitting students were observed. While children in the control group showed a 2% increase in BMI, standing students saw a 3% drop during the same time. The findings were consistent across both female and male students, as well as students of various races.

Standing at school could benefit adolescents who have ADHD. According to a study, ADHD is connected to a lack of physical activity, and a sedentary lifestyle might exacerbate ADHD symptoms. Fidgeting and moving is a vital and natural technique for children with ADHD to reduce symptoms. Yet, there is no non-disruptive manner for them to fidget while seated. Standing desks encourage kids to move regularly, and many come with movable footrests that permit them to fidget while standing.

Empowering students to walk around within the parameters of their standing desk (which would be simple with school desks for toddlers) encourages them to burn energy and enhance classroom behavior and attitudes. It also preserves the focus that they would lose if they sat slumping in their chairs all day.

This advantage exhibited in early kids is equally relevant to older adolescents. Standing school desks will improve the learning environment for students in middle school, high school, and university by making their workstations more mobile and increasing involvement and collaboration in class. As a result, researchers have found a correlation between performance improvement and standing desk use. Furthermore, standing school desk setups increase children's cooperation skills and general social conduct, generating a feeling of togetherness.

Physical well-being contributes to the positive encouragement of mental health. Decreased levels of stress and anxiety and better concentration have been linked to the simple modification of installing standing workstations. Furthermore, standing causes blood circulation, which delivers mood-altering substances into the brain. As a result, students may experience increased happiness and self-esteem.

The standing trend is not a passing trend. Prolonged sitting has been demonstrated to have major health consequences. High cholesterol, diabetes, obesity, high blood pressure, and decreased cardiorespiratory fitness are some of the health effects of excessive sedentary behavior in children. On the other hand, prolonged sitting has a negative influence on children's physical health and their self-esteem, and educational excellence. However, going for a stroll or hitting the gym after school is not enough to offset the negative impacts of too much sitting.

Improvements in technology and shifting societal norms in the twenty-first century have simplified our routines while also introducing major health hazards. While it affects people of all ages, it affects children the most. Incorporating standing desks early on can help to stall and reduce health hazards. Equipping classrooms with school standing desks will not only assist children's health by reducing the effects of continuous sitting, but it will also improve their school performance and boost their collaborative abilities.