Over the last two decades, the usage of computers by office employees has expanded dramatically. Consequently, there has been a rise in the number of health concerns linked to computer usage, the most prevalent of which are vision and eye difficulties. While computer-related eye health concerns are typically only transient, they cause substantial pain to users and are entirely avoidable.

The human eye is not built to stare at a computer display for lengthy periods of time. Previously, office work encompassed several tasks, such as reading, typing, writing, and filing, all of which required a diversity of motions and visual demands, reducing the chances of eye strain. Many of these diverse duties have become merged and completed more effectively from the desktop with the use of computers, lowering the number of 'natural' rests for office workers' eyes and raising the risk of strained eyes.

The following are the primary risk factors for acquiring eye or vision disorders as a result of computer use:

How to Prevent Strained Eyes

Individuals and organizations may take a variety of steps to reduce the risk of employees having eye issues as a consequence of computer usage. These are addressed in more detail below. 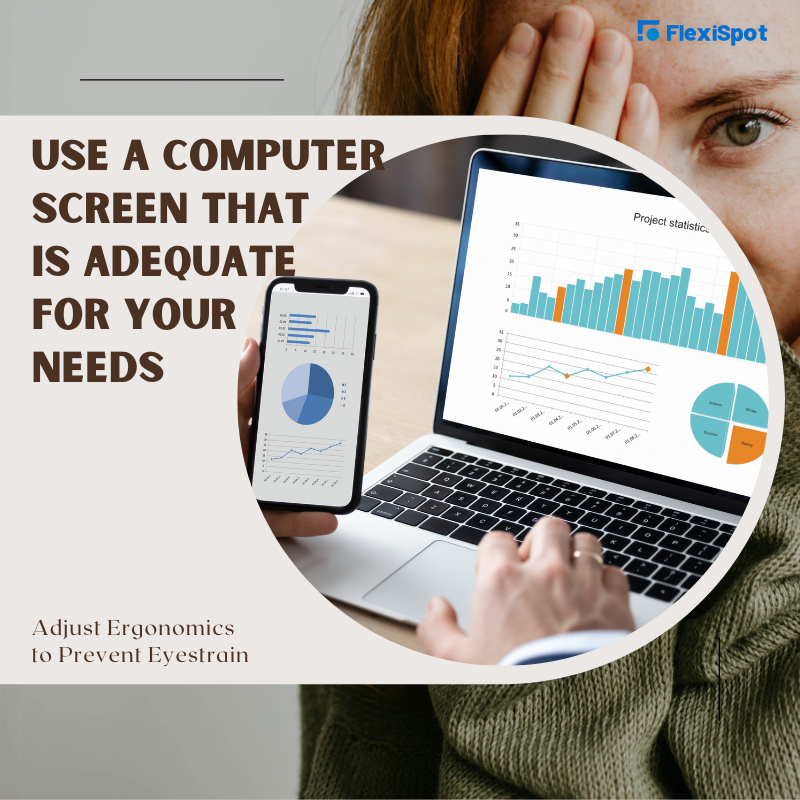 Use A Computer Screen That Is Adequate for Your Needs

Make sure you have a big, clean display with a level surface. The user should also check that the contrast and brightness of their screen are readily adjusted and that the pictures shown on the screen are crisp, clear, and do not flicker. 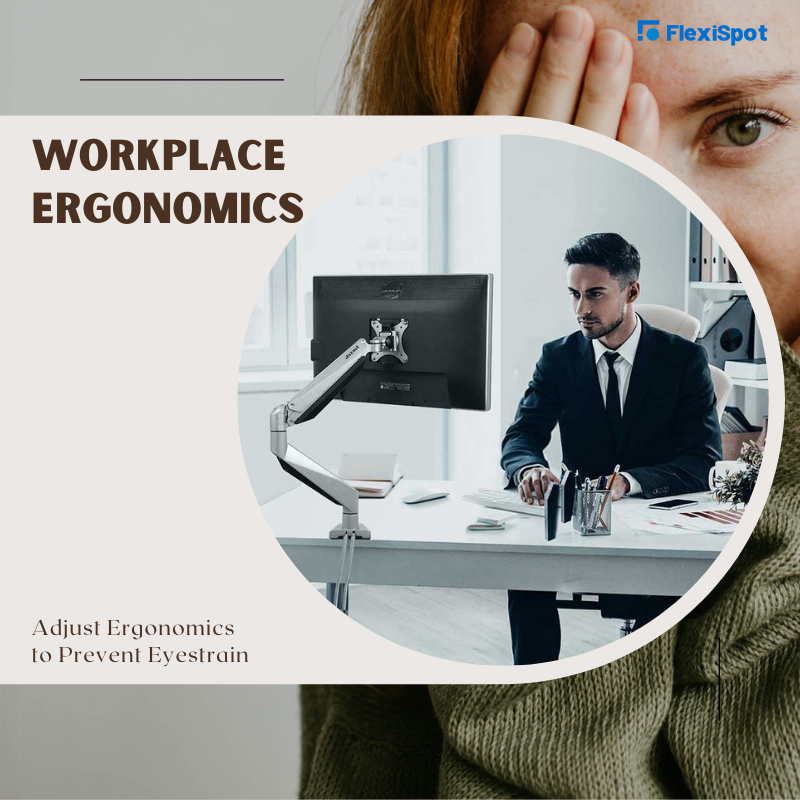 The distance between the eyes and the computer screen is the most essential ergonomic element for eye strain. Users of computers should position their workstations in such a way that the computer monitor is between 18 and 30 inches away from their eyes. Additionally, pc users should take steps to prevent screen glare.

Placing computer displays at a 90-degree angle to windows (rather than right in front of the window or even behind it) and to the side, as opposed to directly underneath any light sources, are two ergonomic considerations that may help prevent glare (e.g., in between fluorescent lights).

The best solution for workplace ergonomics to prevent eye strain is to get an adjustable standing desk that you can set according to your needs. This versatile adjustability can help you when you are working in different lighting conditions (such as working in daylight till after sunset). Setting it at the right height can ensure that you have a workstation that caters to your eye level. 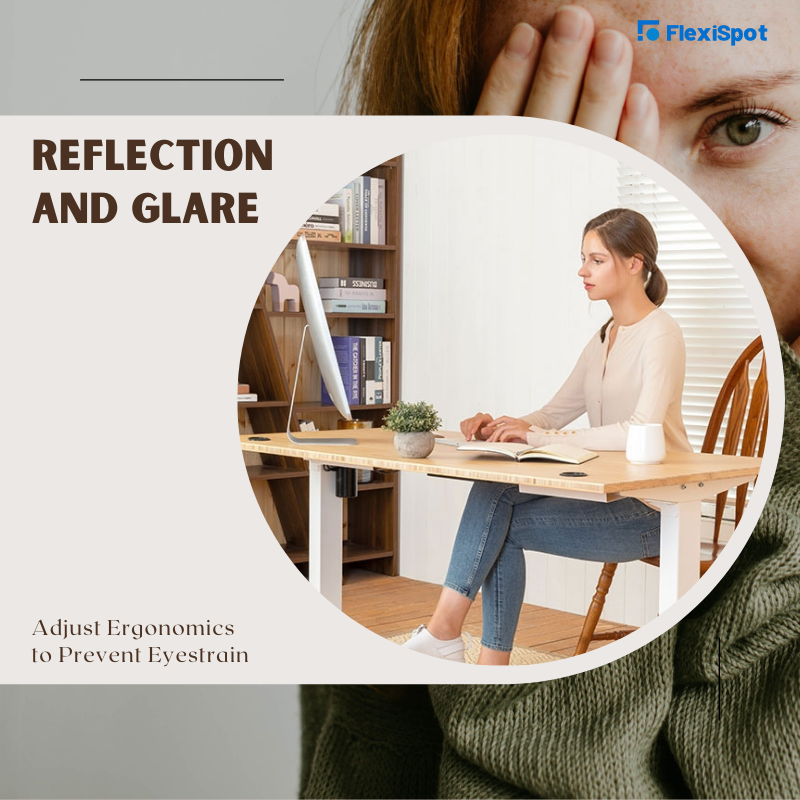 It's also necessary to take precautions to avoid glare, shadow, and reflection from external light sources since they might cause eye strain. When there is a large difference between the light intensity in the background and foreground, glare occurs when a bright window is placed behind a computer screen.

In glare, the eyes must continually adjust to the contrast between bright and dark regions, resulting in headaches, eye fatigue, and decreased vision. Eye strain may also be caused by glare reflecting from a computer screen.

The following are some ideas for reducing direct or reflected light in the office: 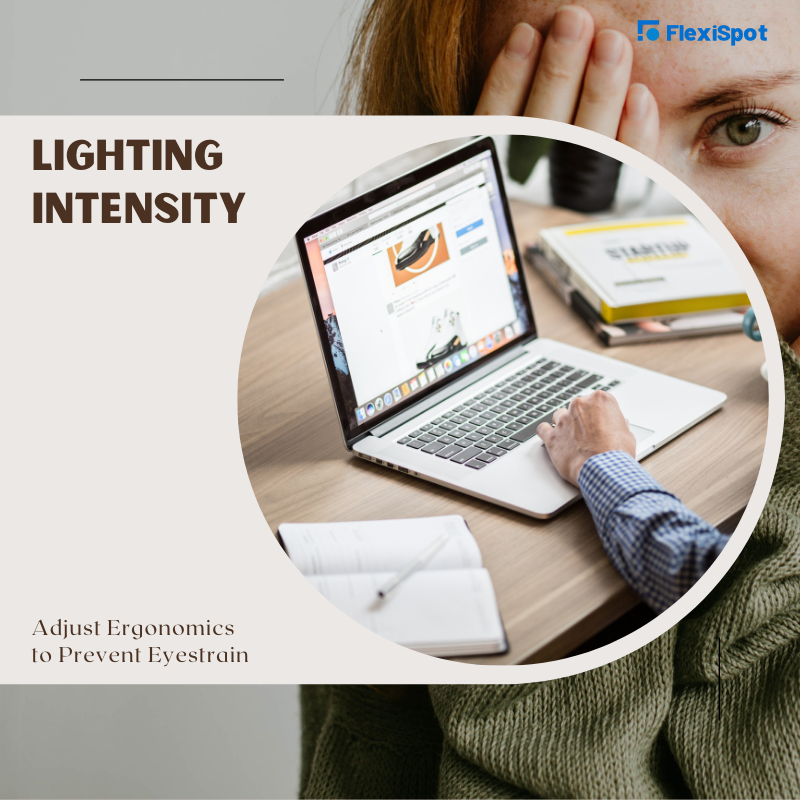 People should be able to readily observe their job without straining their eyes with good illumination. The sort of job being done will determine the amount of light needed. Fine and detailed work, like writing and reading, often conducted in an office setting, needs significantly more intense illumination than occupations that do not require complete illumination of the space (e.g., walking). While lights should be bright enough to allow for detailed sight without hurting the eyes, they shouldn't be so bright that they generate reflections and glare.

Workers are more likely to suffer eye health issues if office lighting is either not bright enough or too intense. Computer users should work in environments that are between 200 and 500 lux bright. The lighting of roughly 300 lux is best acceptable in settings if there aren't any other bright light sources. Brighter lights between 400 and 500 lux are better suited to already bright surroundings or where there are huge contrasts in illumination. Flickering lights caused by old or broken fluorescent bulbs should be changed or serviced on a regular basis. 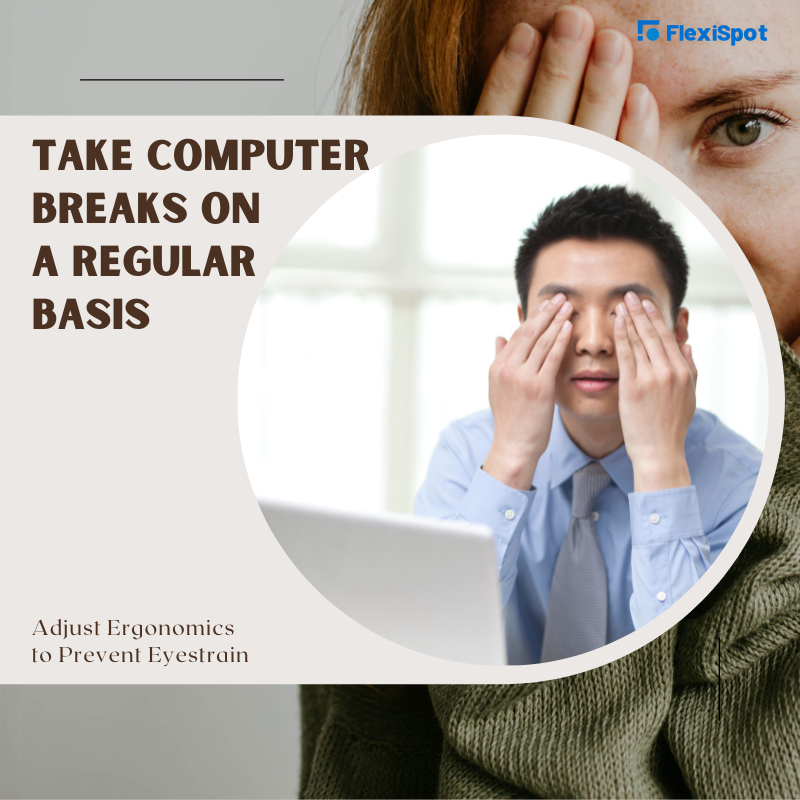 Users should take frequent pauses from gazing at their computer screens to enable their eyes to recuperate and concentrate on distant things. Clinical optometrists often recommend the 20/20/20 rule, which states that you should stare at anything 20 feet (6 meters) away for around twenty seconds after twenty minutes of computer usage.

To avoid eye difficulties and muscular-skeletal diseases connected with computer usage, it is also suggested that computer users take longer pauses (at least one 15-minute break per 2 hours of computer use).

The use of contact lenses exacerbates the severity of dry-eye syndrome symptoms (keratoconjunctivitis sicca). Dry eyes syndrome is a frequent eye ailment among office employees, with data revealing that more than 48% of them suffer from it. As contact lenses may create friction if the eyes aren't sufficiently moisturized, office workers who use them have more serious symptoms of dry eye. While the eye's surface is dry, the lens gets dry as well and clings to the top eyelid when blinking. The pain is caused by the "friction effect" of dry eyes. 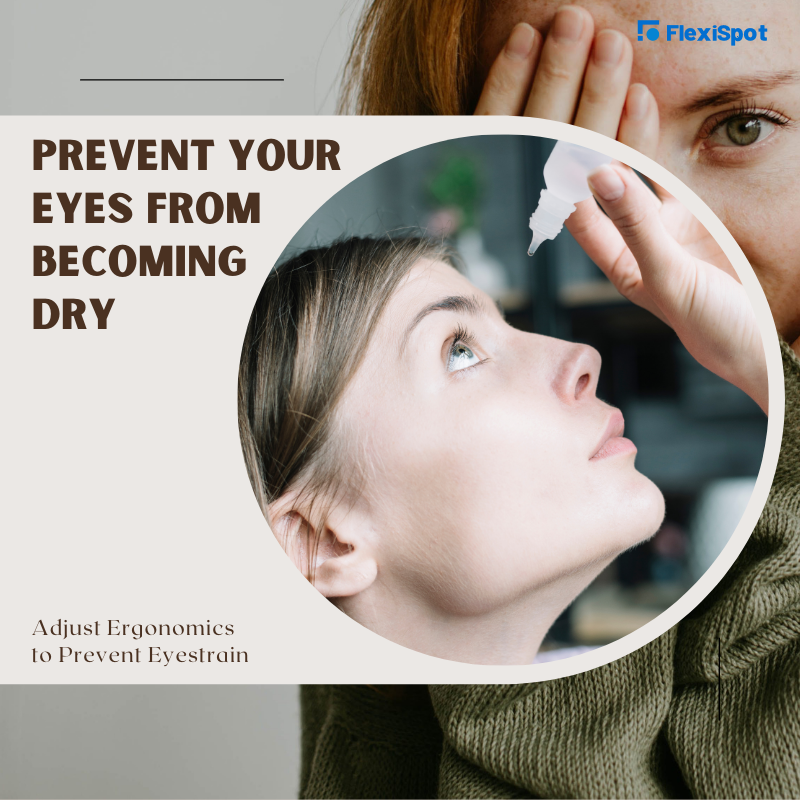 Prevent Your Eyes from Becoming Dry

Additional procedures that may be performed to keep the eyes from drying out include: 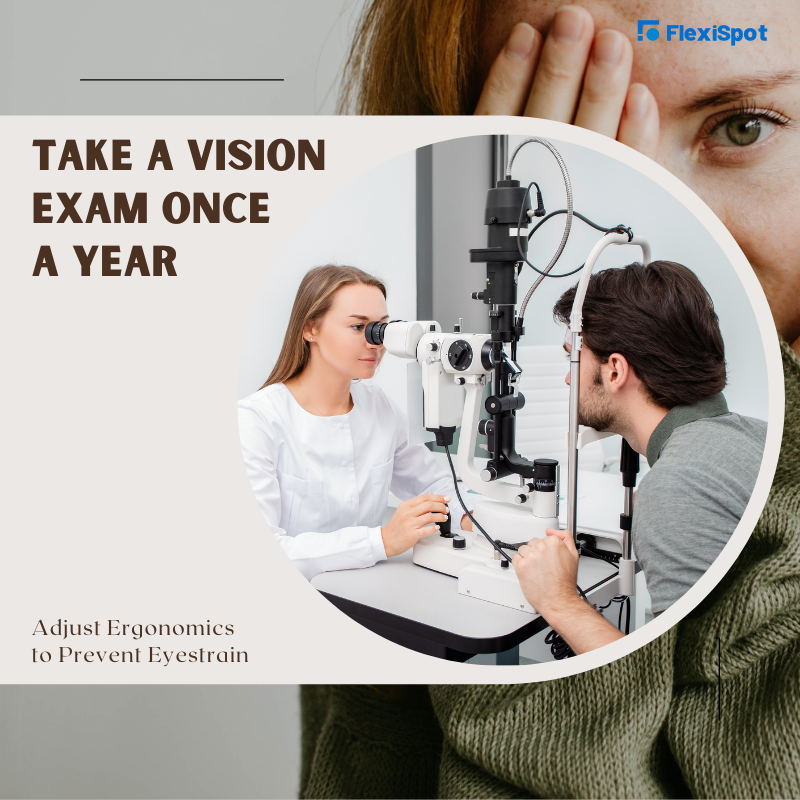 Take A Vision Exam Once a Year

Standard computer users should get their vision tested at least once a year to address any issues with an eye expert. Since optometrists can diagnose eye problems early, they can devise preventive actions. It is critical that individuals inform their doctors whether they use computers since this may affect the kind of lenses recommended (if applicable). 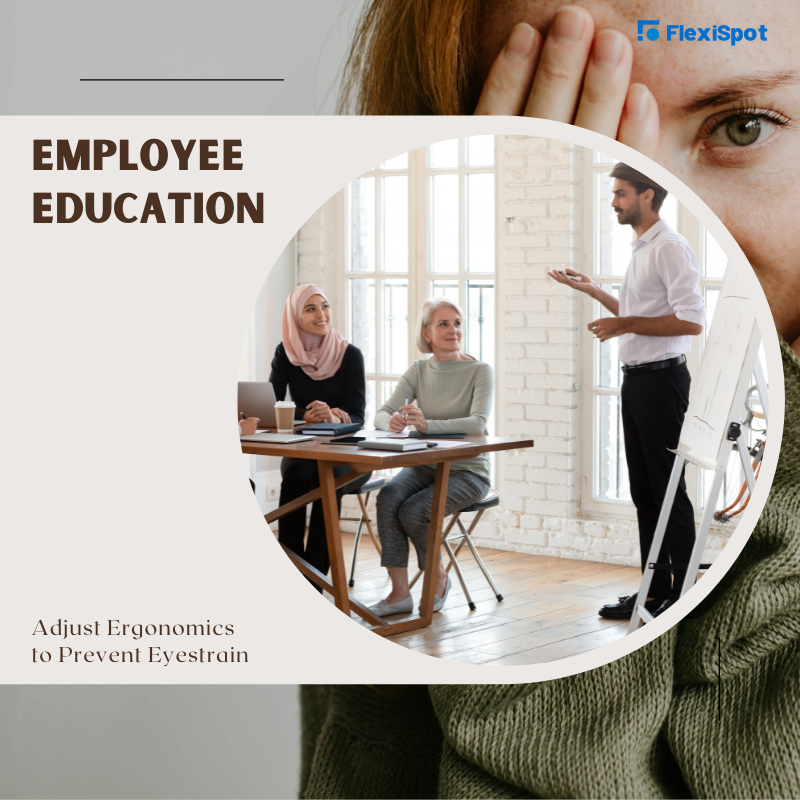 Staff training should be offered to ensure that all staff has the necessary information to implement preventive measures. This involves understanding the symptoms and signs of eye strain, the need to take frequent breaks and do eye exercises, and the capacity to make simple changes to the work environment (such as the computer screen) to lessen eye strain.

Eye strain is a major problem for employees that can impact their vision in the long run. It is important to implement measures such as adequate lighting and adjustable desks so that they don’t have to strain their eyes while working.