The Importance of OCD Awareness in the Workplace

OCD is a mental health disorder whose sufferers experience excessive thought that manifests as repetitive behavior; hence the name Obsessive-Compulsive Disorder. Not to be confused with Obsessive-Compulsive Personality Disorder, characterized by extreme perfectionism, order, and neatness.

OCD ranks among the 20 most common causes of disability and exclusion worldwide. According to WHO, it affects individuals between 15 to 44 years of age. In the US alone, an estimated 1 in 40 adults suffers from OCD.

The symptoms of OCD can be tremendously challenging for a person trying to live a normal life. The common ones include obsessing over pointless things or being stuck on rituals that appear meaningless to the world. People suffering from OCD are also plagued with excessive fear, irrational doubt, aggression towards self, and unwanted thoughts.

Many people suffering from OCD may have to deal with coworkers who believe their symptoms to be forms of attention-seeking, signs of disorganization, or even tardiness. But does it mean you can’t enjoy a fulfilling and successful career if you present with OCD?

Well, that's tied to how aware companies and their staff are of mental health issues. A lack of understanding of OCD can cause an insensitivity in management towards the needs of their employees. This makes it hard for employees suffering from OCD to request the help and support they need to excel at their job.

With the high numbers and even more unreported cases, it's time we played a part in spreading the awareness. That way, competent but affected workers don’t miss out on their chance at career excellence.

How can Simple Furniture Choices Help Employees with OCD?

The frameworks and practices that create an accommodating workplace for OCD personality types are more straightforward than you think. It starts with understanding the signs of an OCD flare-up or personality quirks in the sufferer. Below are some of the most common catalysts of OCD flare-ups and some actionable fixes: 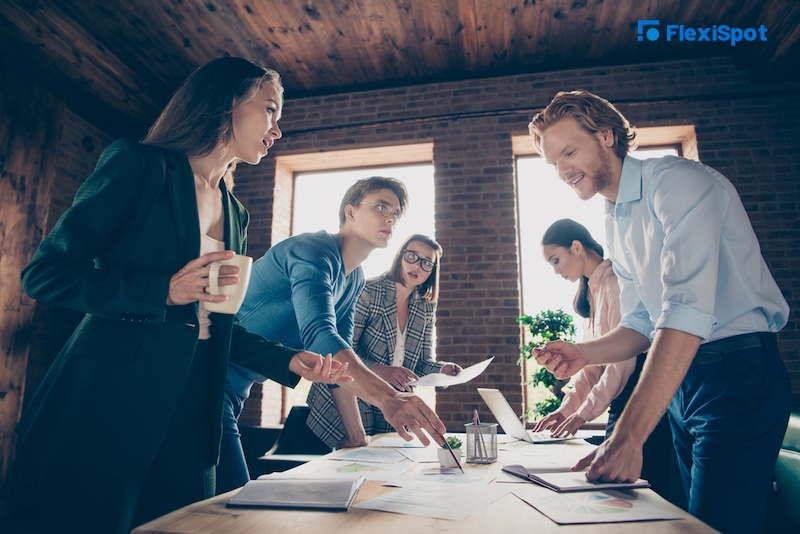 A Compulsion to Check the Same Thing Over and Over

Pigeon superstition (The belief that failure to do or repeat something comes with dire consequences) is one of the most common signs of a person presenting with OCD. Some people with OCD have the compulsion to go over a task repeatedly until it fits into their idea of "what is correct."

Working on projects collaboratively can also help. The supervisor can assess progress and nudge the employee to move to the next step rather than be riddled with self-doubt and circle the same task.

And while it may not always be feasible, it might be more practical to assign such people projects with definitive ends or concrete goals rather than continuous or abstract deliverables. This allows a supervisor to close the project once objectives are met, denying the employee the chance to obsess over certain elements. 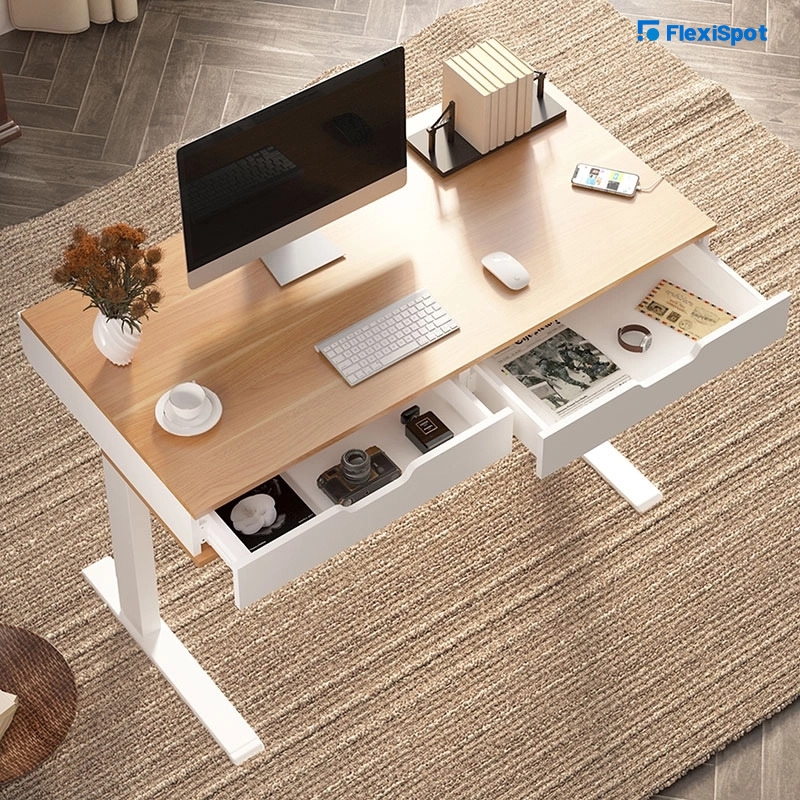 People suffering from OCD demand orderliness and symmetry. This is part of what people casually refer to as being a neat freak. Harmless as that sounds, for people with OCD, a lack of order or symmetry can trigger extreme anxiety and stress or even depression in some instances. If a person with OCD has to sit in the same room with things that fall out of order, their obsessive-compulsive nature deters them from getting much work done.

Accommodating people with OCD means approaching workplace décor with minimalism and, preferably, monotone color schemes. Ensure there are minimum variations for people with OCD to obsess over. Adopt the same furniture style, keep off edgy designs like marble tops, stick to classic styles like rectangular (read, even) tabletops and refrain from abstract artwork.

Most importantly, implement a clean desk policy. This refers to a workspace free of cluttered files, disorganized stationery, and all manner of novelties on an individual’s desk or workspace. A desk with adequate storage helps keep the work area clean and free from clutter. You can bolster this with a desktop tidy or storage rack. With that, workers suffering from OCD don’t have to look at polarizing filing and desktop arrangement systems on their desks or their colleague’s workspaces. 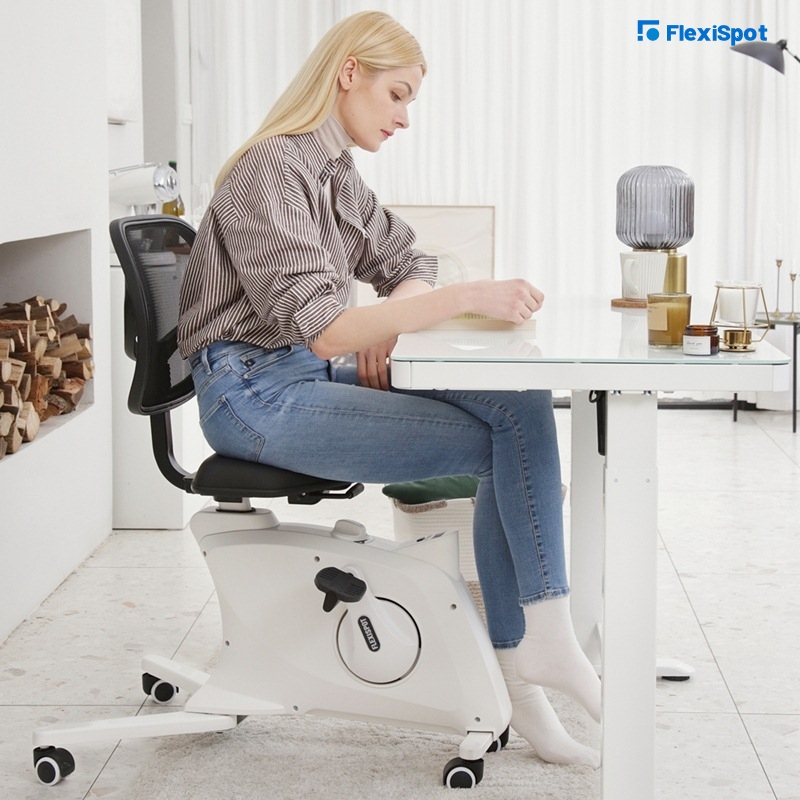 People with OCD rely on routine to control their compulsions. Such individuals easily attain laser focus that can be hard to break from, resulting in hours of physical inactivity. If all that is done while sitting down, it can result in back problems, among other related aches & pains.

One way to avoid such a situation is to group people with OCD with others during special projects. Such a move forces them to develop flexibility in scheduling their workday. It can also be the best way to encourage them to take breaks to boost their energy levels.

In addition, add workout equipment like stationary bikes, which transforms the person’s inability to break from routine into something positive for their physical health. 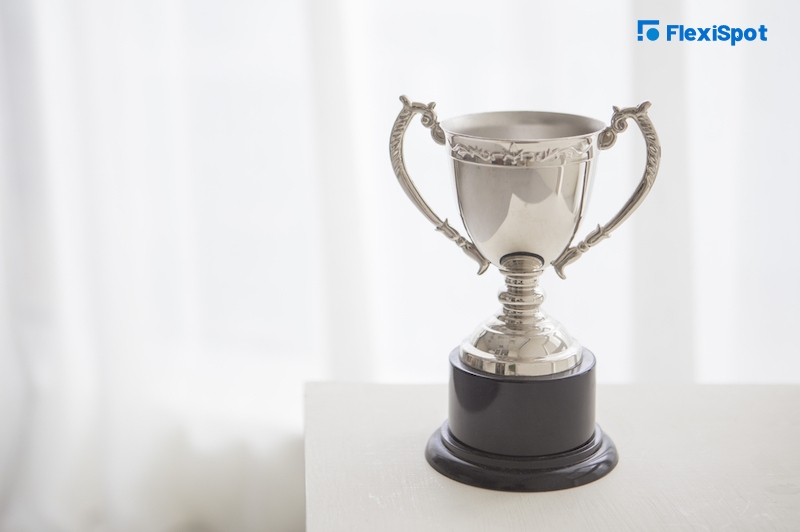 A Constant Need for Validation or Reassurance

You've probably heard, "You can catch more flies with honey than vinegar." Likewise, you can get better results from a person suffering from OCD using positive reinforcement instead of reprimand and a negative feedback loop.

How to go about fostering validation or reassurance depends on your organization. Incentivizing or rewarding commendable service can be an excellent place to start. For example, having an employee of the month plaque works for some companies. This kind of public award creates room for others to partake in recognition, as well.

Feel free to embrace whatever reward system works for your company. And in order to avoid showing special favor to people with OCD, ensure that the levels of awards are diversified to include different levels of achievement. For instance, recognition for personal improvement, taking on new tasks, etc. 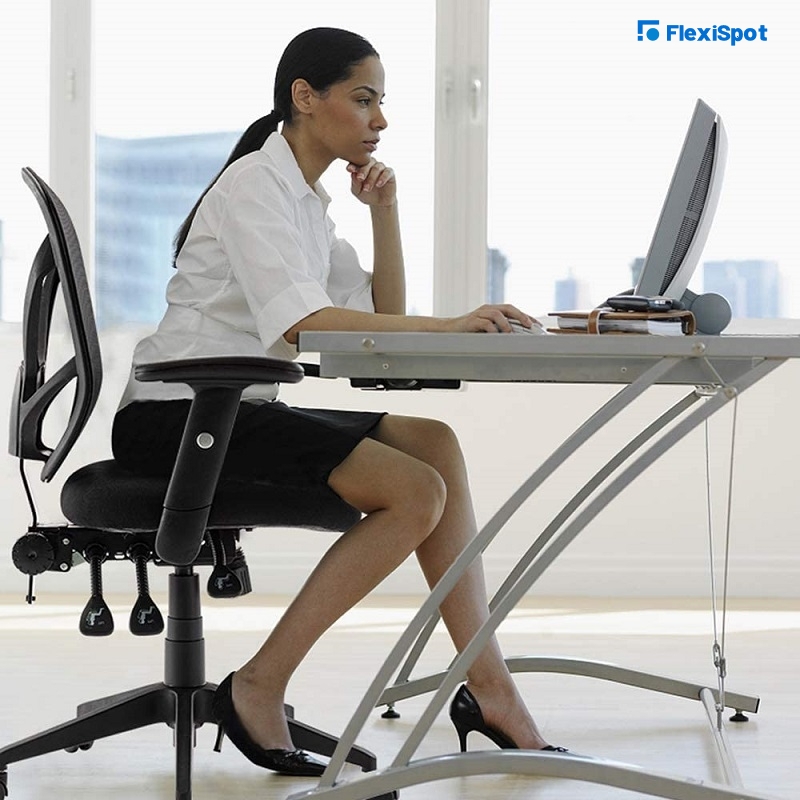 Chaos, even a lack of symmetry, is an OCD sufferer’s worst enemy–it can have a crippling effect. For a person with a compulsion to have things in a certain way, chaos can cause unimaginable stress and anxiety.

One way to avoid this is sourcing office chairs and other pieces of furniture from a reputable dealer. This move allows you to equip an entire office with identical office furniture and supplies.

Afterward, it's merely a matter of creating a uniform and symmetrical workplace. You can make it a fun experience by consulting someone suffering from OCD during the design phase. With that level of consideration, lack of symmetry becomes one less thing for these people to worry about. 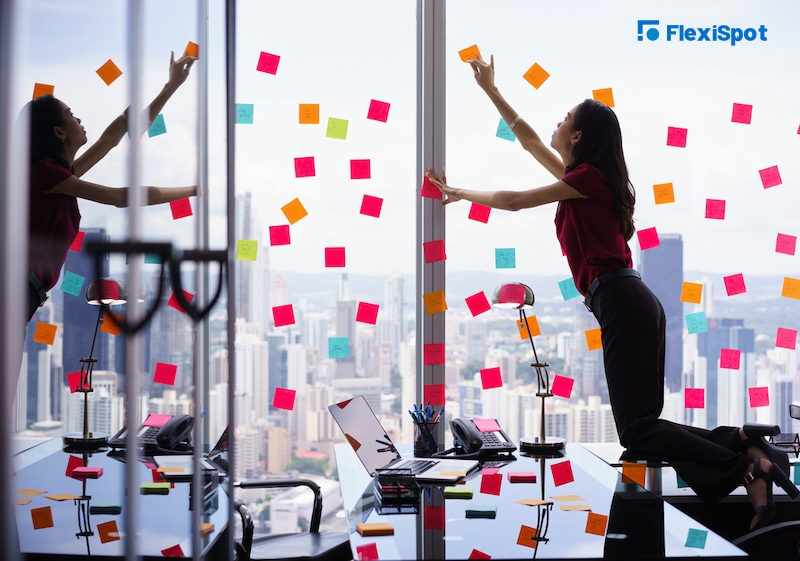 People with OCD often cope with their condition by avoiding situations that trigger obsessive thoughts. This includes things that were left unresolved or problems that have an endless list of solutions. Quantify things in order to ensure that there’s a sort of pause or stop button for the person. For example, asking a person with OCD to come up with a couple of good venues for the end-of-year party is a hellish task.

Why? Because the city probably has tens of thousands of good venues. They cannot settle on just one or just five without thinking about the nine thousand possibilities left out and whether they were better fits. Instead, the instructions should be detailed and precise, e.g., “Get us 10 potential venues, within a $500 budget range, accommodating 50 people max, open past midnight, should serve seafood and within a 20-mile range.” 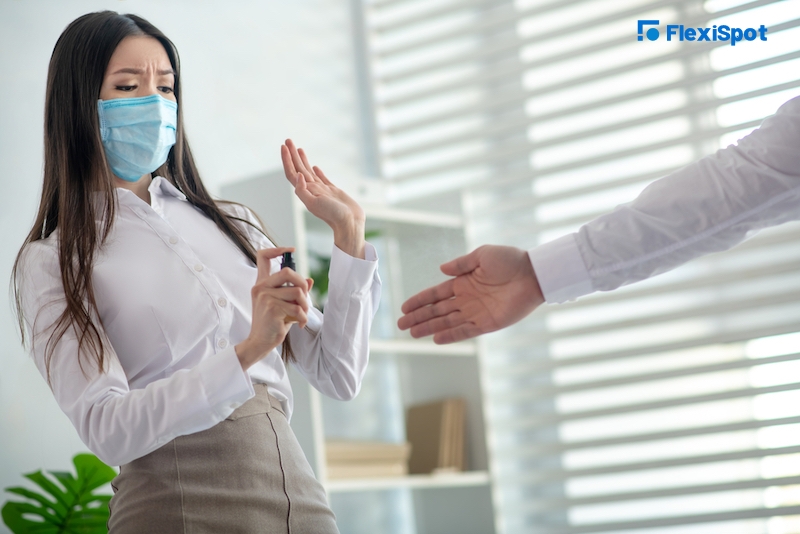 Some OCD personality types have a severe aversion to germs. Therefore, shaking hands, being close to others, touching or being touched by others is a no-no! We even hear of cases where such people walk around with gloves or hand sanitizer to use after shaking hands (under duress, of course). There's very little you can do to encourage OCD personality types to allow people to ‘violate’ their personal space. You just have to wait for such people to burst out of their shells.

The biggest problem is that you often share items like staplers, copiers, and so forth within an office. Sharing such things can only be controlled by providing each employee with their own stationery and accessories–an expensive undertaking. You can allow a BYOD (Bring Your Own Device) policy if you don’t have the cash to spring for all their needs. 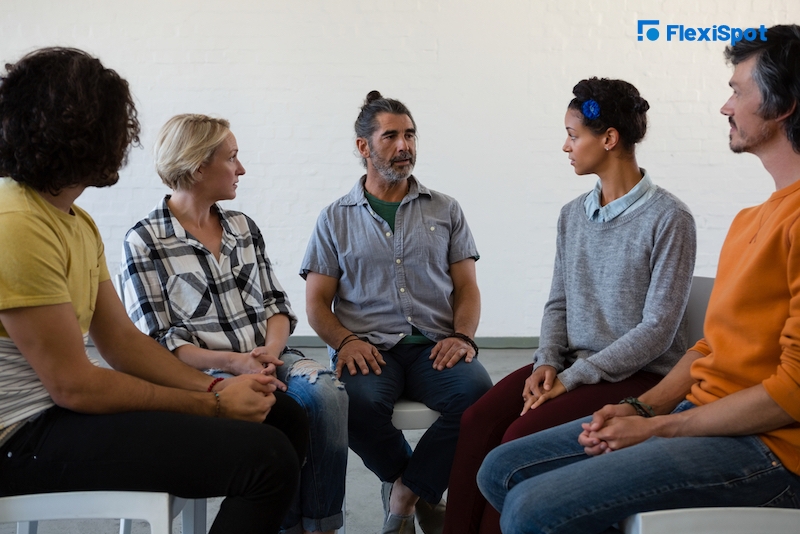 OCD is one of the least understood mental disorders, making it hard to handle. Therefore, one of the most critical steps in tackling it is educating your staff at all levels. Such a move can help others understand the personality quirks and other manifestations of people that present with the problem.

This helps destigmatize the condition and affords OCD patients the support they need to make it through hectic workdays. For instance, if people understand the need for constant validation and reassurance, they can help that person move past such compulsive thoughts.

For the most part, it’s about challenging the black-and-white mentality that OCD evokes in people. But, it’s worth noting that it won’t be as straightforward. So, just create the support systems and safe spaces; the rest will fall into place in due time. 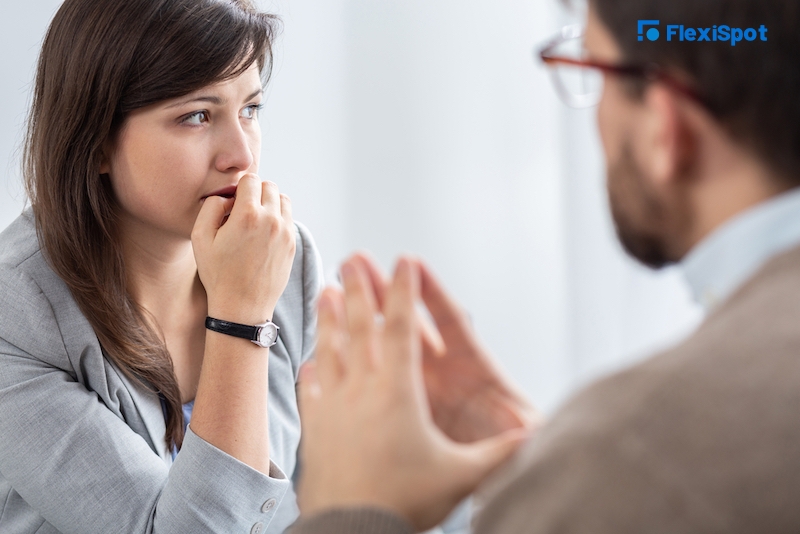 What Should I Avoid Doing While Trying to Help People with OCD?

So far, we’ve established the “DOs” of helping people with OCD in the office. Following these tips can help your coworkers have a more comfortable in-office experience. However, there are some things that can make OCD sufferers regress even after making significant progress.

Here are some of the “DON’Ts” of dealing with OCD:

Asking questions repeatedly and fretting over little things is one of the most prevalent OCD compulsions. For instance, a worker suffering from OCD may worry about a task and a supervisor or fellow team member, “Are you sure we’ll make it to the deadline?” Their primary instinct may be to say, “Yes! Sure thing!”

If your answer is yes, let the situation be a shoo-in. Otherwise, you might be forced to deal with extreme outcomes such as aggression towards yourself and excessive doubt going forth should the task fail to meet the deadline.

Avoid Relating to Their Struggles

We all have the urge to connect and understand each other. After all, humans are social beings, and our ability to cooperate is why we are on top of the food chain. But, if your coworker opens up about their burdensome obsessions, it doesn’t help when you say something like, “I’m also quite OCD, my picture frame is never straight enough.”

Loads of OCD compulsions are embarrassing, stressful, and even taboo to some. Trying to equate them to superficial stereotypes does a lot of harm. It may even feel like you are belittling someone's endless pain and agony.

We’re living in a social climate that calls for inclusion in all vectors of life. Racial inclusion, religion, gender, sexual orientation have all received massive headliners on media outlets in recent times. However, it’s harder to zero in on a specific mental health issue since they are so many. Therefore, it is up to employers and people in such leadership capacities to take proactive steps in making their establishments all-inclusive. We hope these tips and strategies show how easy it is to transition your workspace to an OCD-friendly space. The world is diverse, and as such, we need to be actively willing to accommodate everyone.