All Blogs>Health & Wellness>Blog detail>
Back
Standing Desk Benefits, Why Should You Get One for Work Now
Dec 07, 2021
850 views

You've undoubtedly seen a coworker following up on emails at their workplace treadmill desk while another works on reports at a new standing desk. Did you know they're also decreasing their chances of obesity, back and neck pain, and heart disease?

Sitting for long periods of time has been related to these and many other health issues in studies. Even folks who exercise on a daily basis run the danger of developing health problems if they sit at their desk too much. Standing desks lift your computer to a height that allows you to work while standing. This keeps one on their feet for a longer period of time.

Here are some standing desk benefits that you may not have considered before. 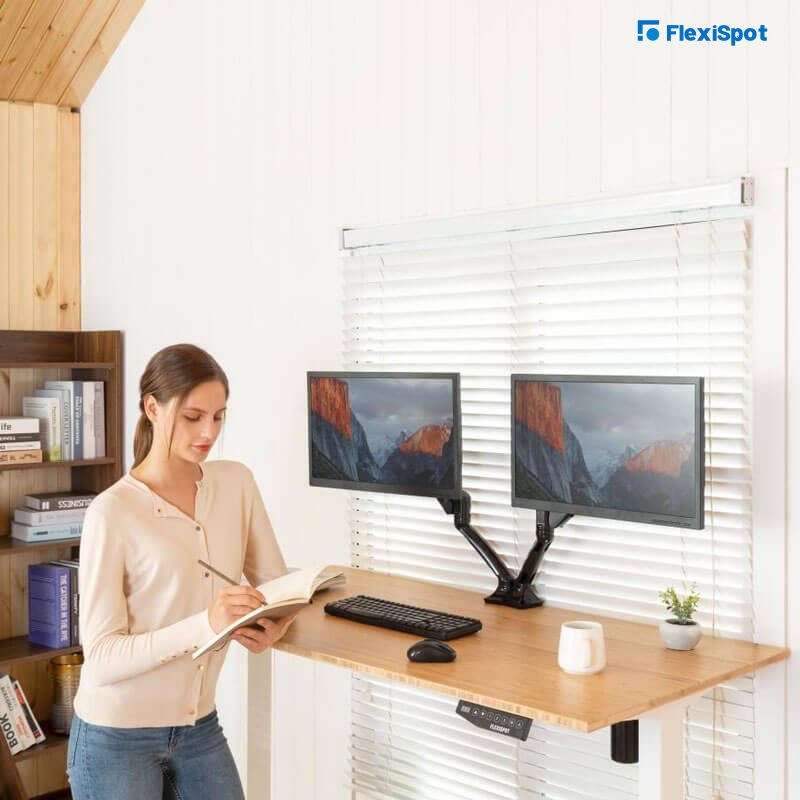 Get Rid of Back Pain

Back discomfort affects 80 percent of individuals at some point in their lives, and it's one of the most common complaints among office employees who are sitting all day.

The result of utilizing an office standing desk on employees with long-term back problems has been studied extensively. Participants in the "Take-a-Stand Project" in 2011 reported a 54 percent decrease in upper back and neck discomfort after spending around 66 minutes of the workday standing.

The "Take-a-Stand Project" participants saw tremendous effects in a little over an hour every day. Consider the benefits of standing!

For over 60 years, researchers have been investigating the advantages of standing! In one research of bus conductors conducted in 1953, it was shown that those who remained standing the entire day saw a reduced risk of heart disorder-related fatalities than those who sat. 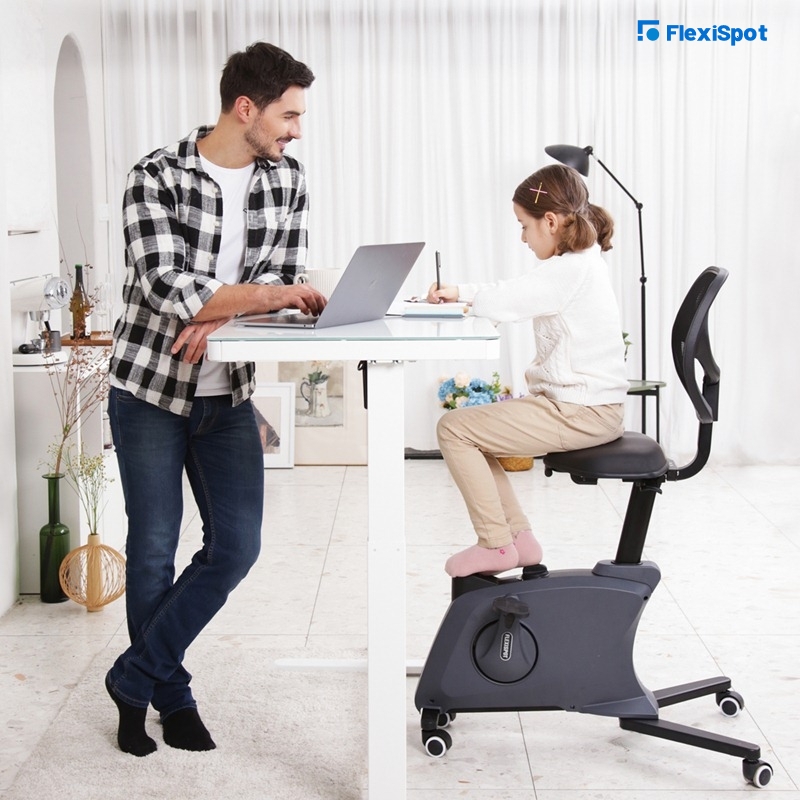 Reduce Your Chances of Gaining Weight and Being Obese

We all know that taking in more calories than your body burns off can lead to weight gain. Over 44% of office employees say they've put on weight in their current position, with 53% of those saying it's because they sit behind a desk all day. 3 What if you can somehow burn calories without putting in any additional effort while working?

You may lower your risk of obesity by burning roughly 50 additional calories each hour by standing rather than sitting. Standing for three hours a day for five days a week would burn 750 calories. Over the span of a year, it would equate to an additional 30,000 calories burned, or around 8 pounds of fat lost. These 30,000 calories are the equivalent of running ten marathons annually in terms of exercise!

While a rise in levels of blood sugar is to be anticipated after a meal, those who experience rises in their blood sugar levels are at a greater risk of developing diabetes. Elevation in blood sugar has also been related to an overall feeling of ill health.

In a brief study of ten office employees conducted in 2013, it was shown that standing over 185 minutes following lunch decreased levels of blood sugar by 43% when compared to being seated for the same amount of time. The subjects also wore pedometers, which were evaluated, ensuring that no significant differences in physical motions were detected among the two groups. This suggests that the difference in levels of blood sugar between the results was due to standing vs. sitting.

Another research of 23 obese office employees revealed that switching between sitting and standing every 30 minutes lowered blood sugar rises by 11.1 percent on average. During the study, the participants' dietary and physical activity was tracked.

According to the research above, just utilizing a standing desk may minimize spikes in blood sugar and the risk of diabetes with no additional effort! 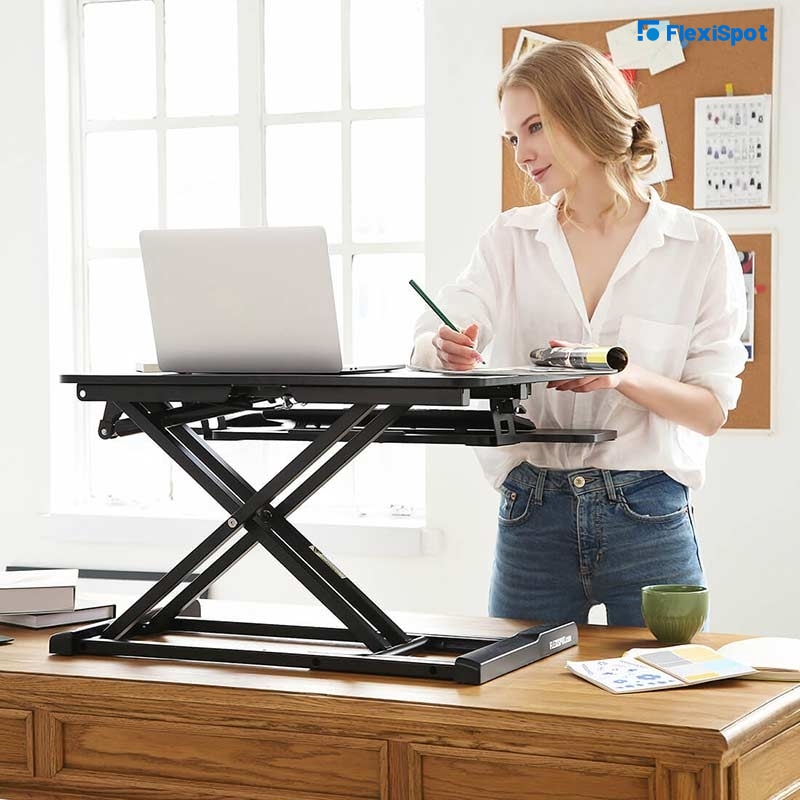 Boost Your Energy and Mood

A higher risk of anxiety and depression has been related to sitting and increasing your overall sedentary time. As a result, it makes sense that standing would boost one's mood and contentment.

24 office employees received a standing desk as part of the "Take-a-Stand Project" in 2011. Over the course of the four weeks, participants self-reported better moods and decreased sitting time by a total of 66 minutes.

Participants were given a number of questions at the conclusion of the 4-week intervention phase about the particular advantages of switching between standing and sitting postures. The following were their responses:

Surprisingly, when the sit-stand workstations were taken, the participants' moods began to deteriorate. This means that adopting a standing desk as part of a larger lifestyle change is required to get the full advantages.

The capacity to conduct everyday chores, including typing or taking phone calls, is a typical worry among individuals considering a standing desk. Working while standing requires some getting used to, but individuals who utilize standing desks experience no detrimental effects on their everyday tasks.

The overall improvement in energy and mood, and the relief from back, neck, and shoulder discomfort, are likely to promote productivity and mental sharpness. When your body in its entirety is in improved health, it operates more effectively, and it is reasonable to assume that productivity will increase as a result. 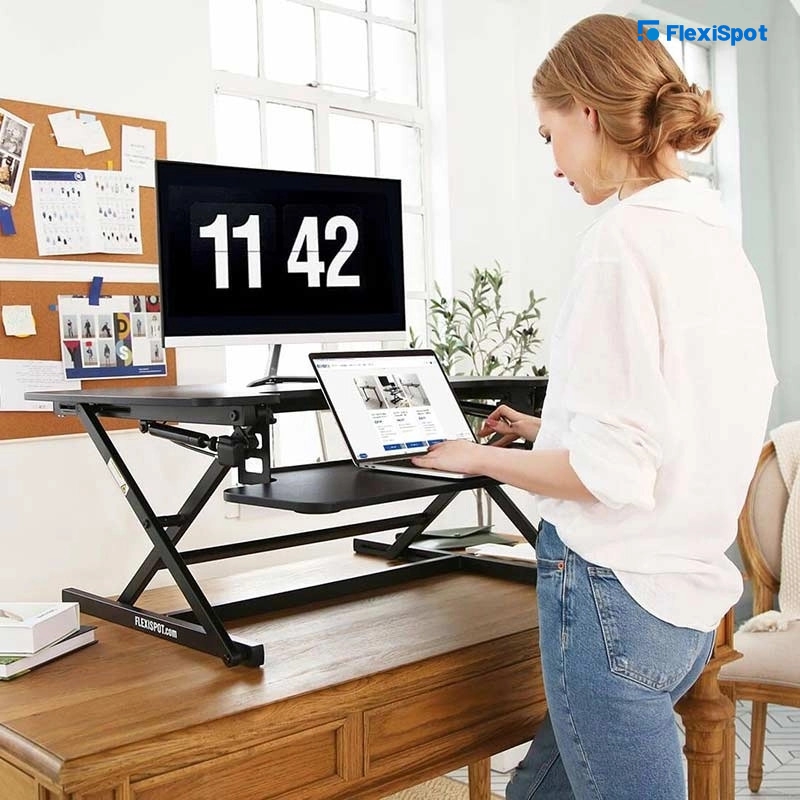 Okay, so this one may benefit your company more than you, but we can all take satisfaction in work well done. Standing may improve interest and motivation in things and others by making you feel active and energized.

According to recent research reported in the British Medical Journal, office employees who swapped their seats with vertical workstations reported greater overall job performance. Their attentiveness and problem-solving abilities dramatically improved. Who doesn't desire to have quick reflexes? In addition, after using standing desks, a contact center research discovered a large and progressive rise in productivity of over 50% in only six months.

Collaborative Participation at a Higher Level

Workers are also more likely to chat with individuals standing close in open places and to continue the ideas flowing. Standing increases energy levels and encourages the flow of ideas and inventiveness. People who are on their feet already, particularly when in a powerful position, are much more action-oriented. The power of this much-discussed psychology may be linked to energy or the placebo effect, but it has a way of promoting confidence and openness in any case. It also serves as a welcome body language for people to exchange easily.

Decreases The Chance of Cancer

Prolonged sitting is a significant factor in the initiation of many malignancies, according to a staggering number of studies. Researchers believe that 43,000 occurrences of colon cancer and 49,000 cases of breast cancer are caused, at least in part, by a lack of physical exercise. Lung cancer accounts for 37,200 instances, prostate cancer for 30,600 cases, endometrial cancer for 12,000 cases, and ovarian cancer for 1,800 cases. Yikes!

Every component of the human body benefits from having a standing workplace. It also encourages people to walk about. It's simpler for folks to take the little step toward mobility since the momentum of being up is already in motion. Weight shifting, swaying, and brief walking are examples of this. Restlessness and little movement may be incredibly good for the health and operation of your organs.

The Best Standing Desk for Offices

If, after seeing the standing desk benefits above, you have made up your mind to purchase one for your office, we have some suggestions!

The Kana Bamboo Standing desk is made out of earth-friendly wood. Bamboo is produced without any chemical fertilizer and doesn't take much effort in replanting. This results in less deforestation and soil erosion too. In some cases, it even allows people to use land that has been wasted from extensive agriculture on land.

The Kana Bamboo Standing desk shows off the natural bamboo grain, which comes from the lateral compression innovations during production. This gives the bamboo a huge tensile strength of 28,000 lbs. per sq. inch. This is even more than the 23,000 lbs. per sq. inch of steel. The strong and durable material means that your desk will be long-lasting.

The desk has a 2H carbonized lacquer coat on top, which is resistant to insects, water, and scratches. The steel tubing is coated with powder to reinforce it, keeping away stains or scratches too. It comes with a user-friendly interface and adjustable height options.

Plus, you'll receive all the standing desk benefits mentioned above too!