Sitting is the new smoking-you're probably fed up with this phrase, but it's the reality in today's office space. Prolonged sitting with little or no physical activity has been linked to significant health issues, some of them fatal. It's a no-brainer that prolonged sitting enhances the risk of chronic health problems, including diabetes, heart disease, increased blood pressure, obesity, and some cancers. Besides these long-term effects, there are also short-term risks associated with excessive sitting, like increased blood pressure and depression, which all lead to decreased productivity.

Following increased awareness of the effects of excessive seating, the office space has undergone significant evolution in an effort to combat the "sitting epidemic". One way office workers are averting excessive seating is using standing workstations, commonly referred to as standing desks. Standing desks are the new hype in workplaces.

With more and more office workers jumping on the standing desk bandwagon, sitting desks are almost becoming "extinct". Sitting desk protagonists are also claiming that standing desks or sit-stand desks are overrated with no proven benefits- after all, we humans have lived a sedentary lifestyle since ancient days, and society has not been erased. So, are standing desks really worth it, or are they just another overhyped fad that will fade away with time?

Standing desks and sitting desks are two workstation options that can have drastically different effects on your health. While increased productivity has been reported with standing desk usage, there's also the downside of a sore back or pins-and-needles in your feet from prolonged periods being upright. Sitting seems more comfortable at first glance, but you may find yourself worse off than before if you don't change up positions periodically throughout the day to ensure proper blood circulation. Here's a close look at the benefits and downsides of standing desks and sitting desks. 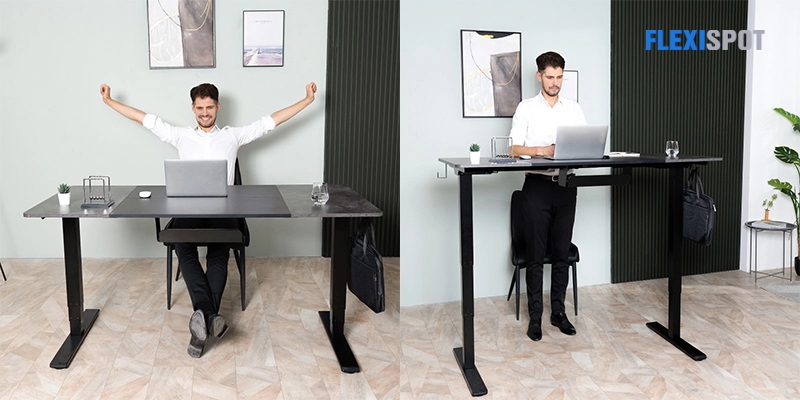 A standing desk also referred to as a sit-stand desk or a stand-up desk is a desk that allows you to stand comfortably while working. Standing desks come in various styles, designs and may be specialized to suit different tasks such as writing, architectural drafting, drawing, etc.

Some standing desks are only used while standing, while others are height adjustable allowing users to seamlessly transit between sitting and standing by adjusting the desk height using a hand crank, electric motor, or a counterbalance system.

Benefits and Downsides of Standing Desks

Standing desks have been growing in popularity over time as many proprietors and business owners alike report higher productivity levels among their employees when using such workstations (which isn't too surprising). While standing desks have plenty of benefits- some scientifically proven, they also come with several drawbacks. In fact, excessive standing has been linked to health conditions such as lower back problems, musculoskeletal disorders, varicose veins, and increased chances of developing heart disease and cardiovascular disorders. Below are the pros and cons of standing desks. 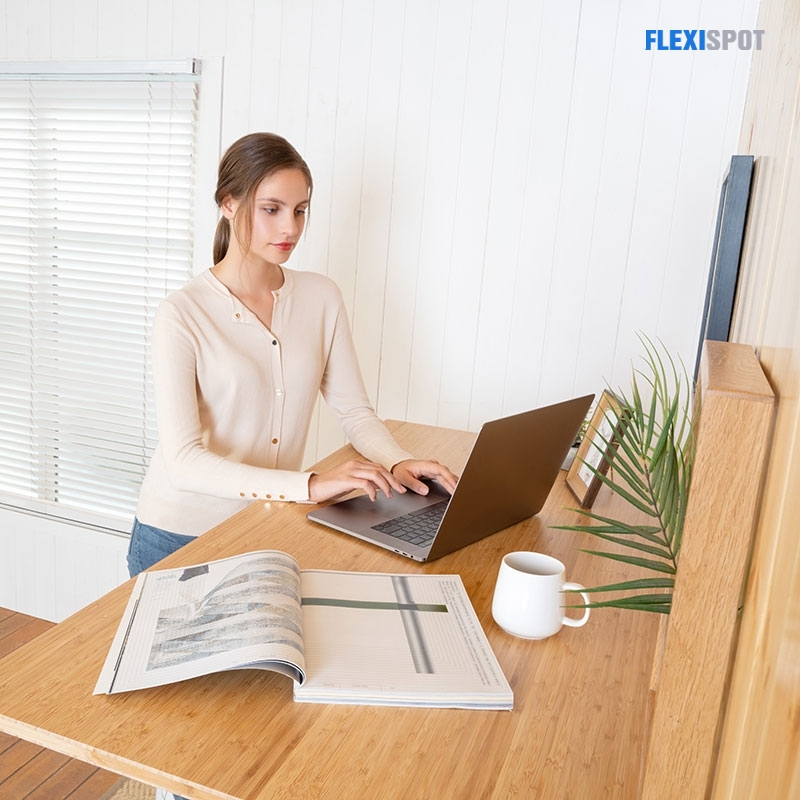 The main benefit of a standing desk is that it allows you to alleviate the effects of prolonged sitting. By creating a balance between standing and sitting, standing desks significantly contribute to your overall well-being and productivity. Height-adjustable standing desks offer plenty of benefits thanks to their versatility in the sense that you can adjust the height to suit you, whether standing or sitting. As such, you can seamlessly alternate between sitting and standing in your otherwise sedentary job. Some other benefits of a standing desk include:

One of the major downsides of standing desks is that it takes some time to adjust and get used to standing. It may feel uncomfortable or dramatic to alternate between standing and sitting in the course of your workday. Excessive standing also leads to several health conditions, including increased risk of heart disease and cardiovascular disorders, and lower back problems.

Some of the major cons of using a standing desk include:

Working at a desk may not be the most exciting profession, but it's something that everyone from an executive to someone who works in retail does on their day-to-day. Sitting desks are more of this traditional workstation with no adjustable height and usually have you sitting down while working, unlike standing desks which can allow for some movement during your shift!

So what is so great about these stationary stations? Well, they're good if you want to comfortably take care of your office-related tasks like writing up reports or making plans instead of active duties. But there are also drawbacks such as lower productivity levels due to having less natural movements throughout the day. Being seated also makes people feel tired quicker than when they stand. 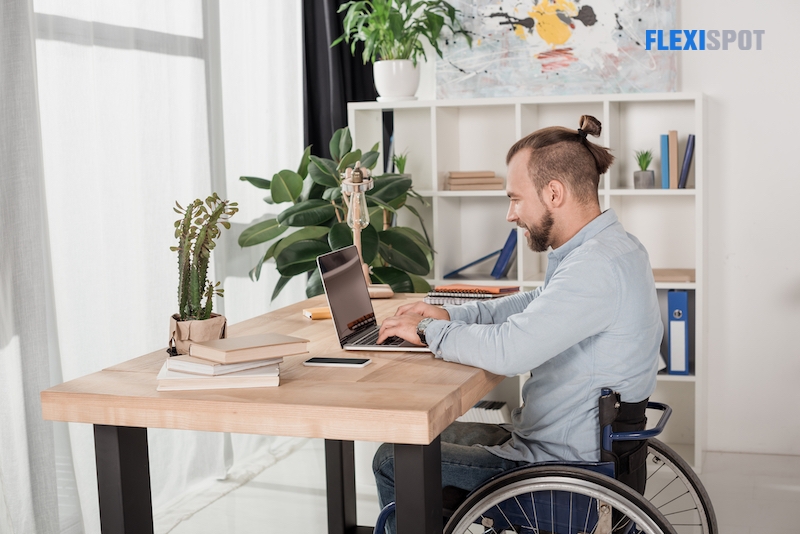 Pros and Cons of Sitting Desks

Not everyone can be productive or have the ability to focus on their tasks while working when standing. Most people are used to sitting when working and therefore prefer sitting at desks- it feels more familiar. Sitting desks are also ideal for individuals considered to be overweight or obese. These individuals find it extremely difficult to work while standing, and it puts a considerable strain on their bodies.

Also, unlike standing desks, sitting desks are more affordable and easily accessible in different designs. Standing desks are still a new concept, and it may be pretty difficult to find replacement parts and accessories. Sitting desks come in various shapes, designs, and colors to suit your specific style or need.

Sitting desks are also ideal for disabled individuals or persons suffering from health conditions such as hypertension, heart disease, and circulatory problems. Overall, it's important to note that not everybody can comfortably stand while working, meaning that sitting desks are well suited for a wider audience.

The biggest drawback with using sitting desks is that they take an all-or-nothing approach towards standing. To put this in context, you cannot stand while working on a sitting desk-it's impossible. With the significant benefits now associated with standing at work, sitting desks are potentially viewed as unhealthy office furniture.

Another downside to sitting desks is that they are less versatile than standing desks. There's no way for them to be adjusted and customized towards your height or body type, which can become a problem when looking at ergonomics, as office furniture should provide maximum support for good posture while also maximizing comfort. 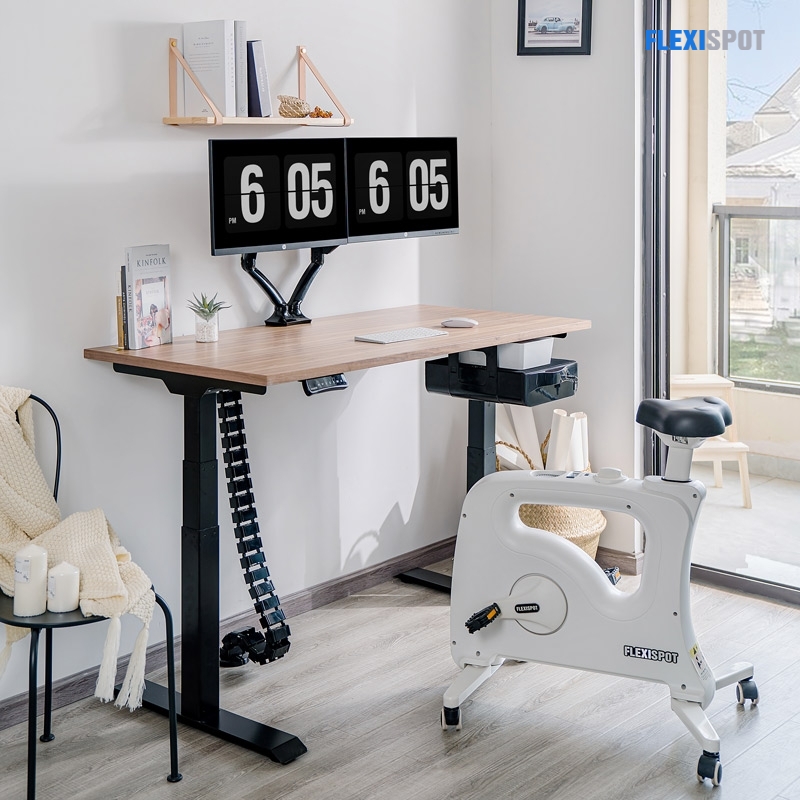 It's a debate that has been going on for some years now, with no end in sight. Some people stand, and others sit at their desks. But you know what? Standing up is way better for your health than sitting down all day long! In fact, sitting desks have no tangible benefits over standing desks, especially when it comes to health and well-being. It's scientifically proven that excessive sitting- up to 8 hours per day- comes with significant health consequences and puts one at risk of potentially fatal lifestyle diseases that can lead to premature death.

While excessive standing is no different from prolonged sitting, intermittent standing offers plenty of benefits that enable you to stay healthy and productive. With a standing desk, you can incorporate exercise equipment in your workspaces, such as a stationary bike or a treadmill, to overcome the effects of sedentary living.

Standing desks have also been proven to better enhance productivity when compared to traditional sitting desks. Many employees using standing desks have reported that they are better focused and are able to undertake tasks much faster and more accurately when using a standing desk.

When compared to sitting desks, standing desks facilitate better posture since it's much easier to stand upright than to sit upright. Maintaining the correct posture comes in handy to prevent chronic pain and body stress and significantly reduce back pain.

However, while standing desks offer plenty of benefits over traditional sitting desks, such benefits can only be reaped when the desk is used in the correct manner. The correct way to use a standing desk is to alternate between sitting and standing. Recent research established that a 3:1 ratio between standing and sitting is ideal for pretty much everyone. This means that for every 45 minutes you spend standing, you should sit down for at least 15 minutes.

To achieve this, you’ll want to use a timer and consider purchasing a height-adjustable sit-stand desk such as the Standing Desk Pro Series. This standing desk features a dual-motor lifting system, programmable sit/stand system with three memory height presets, allowing you to seamlessly alternate between sitting and standing via the touch of a button. The reminder system will inform you when it's time to sit/stand with the memory height feature saving you from the hassle of adjusting the height every time you want to switch between sitting and standing.

With more office workers becoming aware of the benefits of standing desks, these desks have become widely popular in today's office spaces. Standing desks offer plenty of benefits over traditional sitting desks, which promote prolonged sitting-an activity that has been scientifically proven to be quite unhealthy. The primary benefit of standing desks, notably height-adjustable standing desks, is that they allow users to find a balance between sitting and standing for enhanced productivity and well-being. 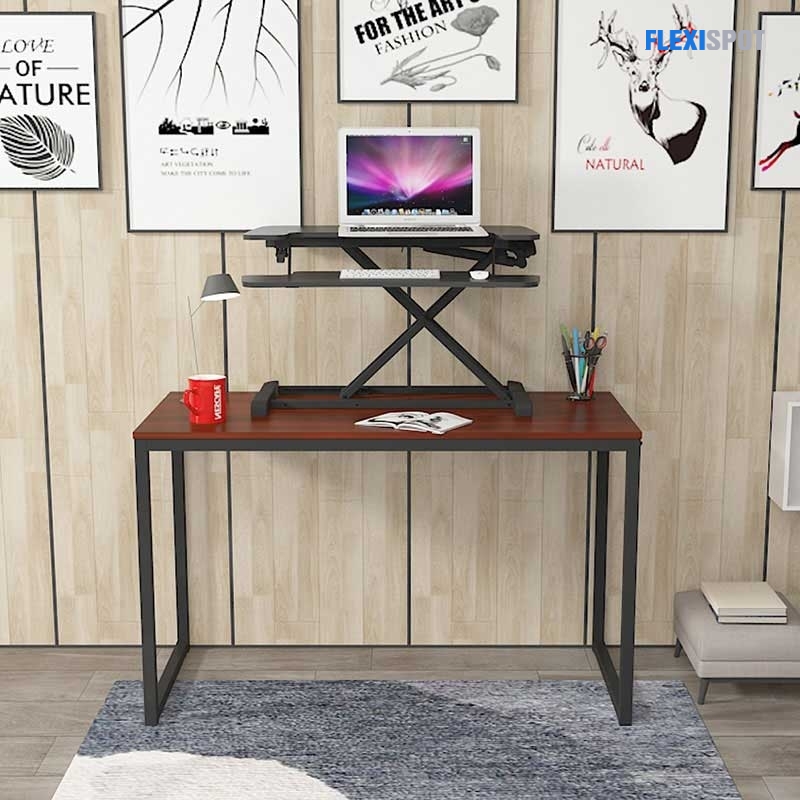 If used correctly, standing desks are highly beneficial. However, not everyone can comfortably work while standing; some fine motor tasks can only be done while seated. As such, traditional sitting desks cannot be completely written off or termed as unhealthy. If you can't use a standing desk, probably due to health restrictions or personal preferences, the Fixed Height Table FD1 -47" W is a great option, especially if you're a minimalist. It's a gorgeous modern multipurpose sitting desk with sturdy construction and is available in multiple colors to match your style and interior décor. What’s more, it’s compatible with FlexiSpot standing converters, just in case you’ll want to incorporate a little standing throughout your day.